Home » News » The “Welcome Stranger”, the biggest gold nugget in the world 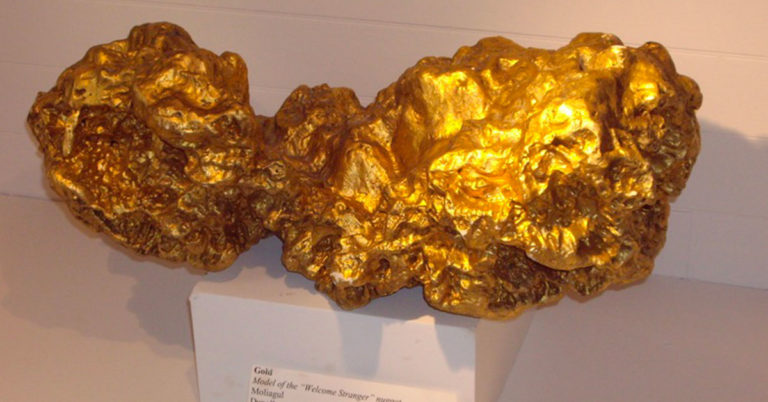 A gold nugget is often imagined to be modest in size. However, some discoveries bring to light “gold nuggets” whose dimensions are more reminiscent of those of a stone. Thus, in Australia, on February 5, 1869, two migrants from Cornwall in the United Kingdom made an astonishing discovery: a 72 kg and 61 cm long piece of gold, later named “Welcome Stranger”.

A record still unmatched today for a gold nugget as the “Welcome Stranger”. While Australia is one of the world’s largest gold producers today, its reputation is not new.

Like the gold rush of the American West, the Australian province of Victoria also experienced its rush which attracted thousands of prospectors in the second half of the 19th century.

This was the case for John Deason and Richard Oates. The two men had met in Cornwall and emigrated to Australia to become gold prospectors.

At the time, the small town of Moliagul was one of the centres of research for the precious yellow metal. Of course, there were many conscripts but few elected officials. The city was full of hotels, shops and bars.

The discovery of the nugget was, for both prospectors, relatively simple. If the two comrades had been criss-crossing the country for seven long years in search of fortune, their arrival in Moliagul sounded like the end of their epic. To find the “Welcome Stranger”, no mines were dug. The pile of gold outcropped on the surface of the ground, along a slope, embedded in a quartz block.

After long efforts and the breaking of a pick handle, gold was extracted from the earth. The nugget was then weighed in the town of Dunlay.

However, there’s nothing left of the nugget. It was first broken so that it could be weighed, and sold by the two gold diggers for the sum of £10,000.

NEWMONT CORPORATION, THE WORLD’S LARGEST GOLD MINING COMPANY
How to extract gold from the bowels of the earth