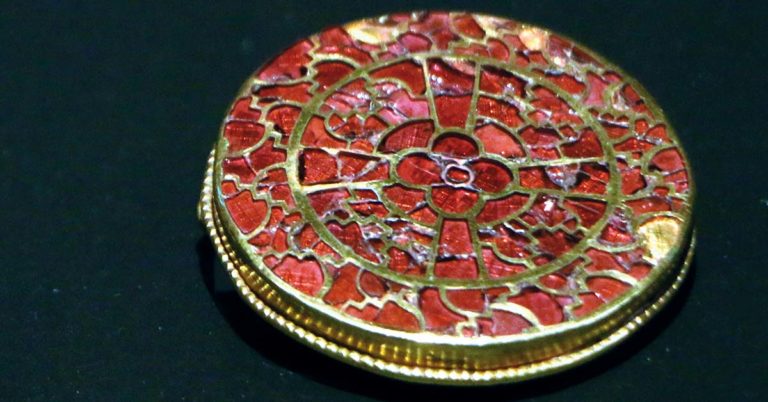 In 1959, during a campaign of excavations, a team of archaeologists discovered a sarcophagus, which luxury funeral furniture seems to indicate that it is a new royal tomb. Even more than by the furniture, the researchers are intrigued by the imposing jewels stored near the body. These designate a female character and confirm her high lineage. What’s more, these jewels are representative of Merovingian art, precisely that of the sixth century: the treasure consists of a pair of fibulas, pins to hold clothes, a belt decoration, earrings and a ring, all in gold and silver. It is finally thanks to an inscription on the gold ring—Arnegundis—that the deceased was identified. The ring has a second inscription—Regine (queen, in Latin)—which leaves no room for doubt. It is Queen Arégonde, wife of King Clotaire I, founder of the Merovingian dynasty. As a worthy sovereign, she was buried, according to the Merovingian custom, adorned with all her jewels. The latter demonstrate the talent of 6th century craftsmen, who excelled in cloisonné jewelry—a technique of inserting various precious stones in between gold partitions.
Today, Queen Arégonde’s collection is preserved near Paris, in the National Archeology Museum of Saint-Germain-en-Laye.